I've always made lists. Even when I was young and my brain was less clogged, I was worried about forgetting.
​
In 2011 I started sharing my lists, with very sloppy blog posts. I used the lists to inspire and document. They don't usually help me get things done. In fact my lists usually distract me from the things that need to be done.

As a kid I made lists, usually for documentation.  This is a photo from when I was 11 and living in Italy with my family. There were so many new things to see and observe, I had to record it all in little spiral notebooks.  One book held a list, with descriptions of suspicious characters.  Another book recorded all the steps I climbed, in domes and bell towers and museums during our 6-month stay.

I look a little worn down by all my list making in this photo.

​Here is a photo representing a list I made for my 50th birthday, quite a few years back. It was an inspiring list of 50 things I wanted to do to celebrate my birthday.

My sister had to fly in from Oregon to help with this challenging and exhausting week of oddball activity!

Here is the website my sister made to capture the week: lhttp://www.tributewebdesign.com/beth/list.html

At this point, I have 13 lists on my Beth Lists website.  Some blogs share about challenges that have been completed, but most are on-going. However my 12th and 13th are just long pages. Weebly decided to cut me off. I've reached the limit, of blogs that Weebly allows on a website. That can't stop my happy habit of sloppy blogging and listing!

This is the list that prompted me to create this website and my first blog.   I began in 2011 with a goal to enjoy as many culturally different dining experiences as I could in one year.   By July 4, 2012 I  reached my goal of over 50 different countries.  After a year, I learned that dining experiences are as exciting or entertaining as you make them.  I decided to continue exploring and blogging about all the curious places that are out there in the food world...ethnic, regional or just plain odd!

I started this one on my 55th birthday in April 2012.  Each week I added a new person to the list.  The people I wrote about were ones I remembered meeting briefly in my past 55 years. Each person made some kind of impression on me.  In stores, on trains, in waiting rooms...you never know how many interesting people are out there in the world!  I reached my goal of 55 in April 2013, but have continued to add strangers to my list.

I keep a 2-inch stuffed bear in my camera bag.  It's a ridiculous excuse to get down on my knees and see the world from a different perspective.  He's been to a lot of places and had a few adventures with balloons, candles and champagne and car tires.  I started blogging about Little Bear's adventures a few years year ago.  But after a while, L.B.'s strong personality got in the way and he took over the blog writing.

I  have a 25 year old quilt that has never rested on a bed.  Since I made the quilt, it's gone on at least 100 imaginary adventures with the stories I tell to children.  In recent years I've gathered seniors around the  quilt in centers and nursing homes to encourage their stories.  Now the quilt travels with me and becomes a tool to bring children or adults together in places far from my home.  I've been collecting stories about these quilt adventures and in 2012 I began blogging about what I've learned along the way.

I started this list as a  teenager, long before I'd ever heard the term bucket list.  I used a  discarded  diary to scribble a  list of things I wanted to  do in my lifetime.

To parachute was on the list, along with some more unusual goals, like Live with the Amish.  I've tried to share some of the fun I've had along the way while working on some of these challenging and odd goals.

I started this list on Mother's Day 2013 to honor Mom and her love of picnics.  Since I inherited Mom's picnic enthusiasm, I have a lot of picnic photos and memories.  My plan was to spend a year sharing some of the recollections and to also create some new picnic memories!  Since Mom was a mother for 60 years, I set my goal to share at least 60 picnic memories!  The year ended, the goal was met and the picnics continue! 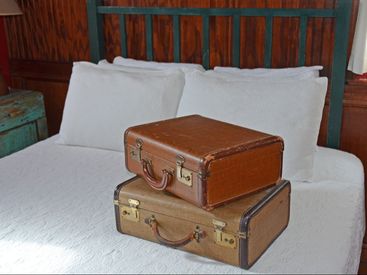 ​As a child I adored Holiday Inn and Howard Johnson's.  I loved knowing there would be tiny soaps and swimming pools. In my "old age" I have learned to embrace the unexpected and enjoy the surprises... good and bad that come from staying away from chains.   Starting in January 2014, I embarked on a new goal (with the help of my husband Don, who is a good sport and a good sleeper) to spend a couple years exploring some of the oddest and most unusual hotels, motels and inns we can find.  By 2016 I went beyond the goal of 90 Notable Nights!   However, now Don and I are hooked and the list grows!